Opposing groups in the ongoing debate about abortion in Northern Ireland have staged simultaneous protests outside Parliament.

The events were organised by Amnesty International and Both Lives Matter.

Abortion is illegal in Northern Ireland unless there is a serious risk to a woman's life or health.

Unlike other parts of the UK, the 1967 Abortion Act does not extend to Northern Ireland.

As part of the Amnesty protest, 28 women marched to Parliament with suitcases, representing what the organisation said is: "The number of women who fly from Northern Ireland for an abortion each week".

The campaigners, who included two actresses from the TV series Derry Girls and a number of MPs representing seats in Great Britain, also presented a petition to the Northern Ireland Office.

The petition, which has 62,000 signatures, called for abortion to be decriminalised in Northern Ireland. 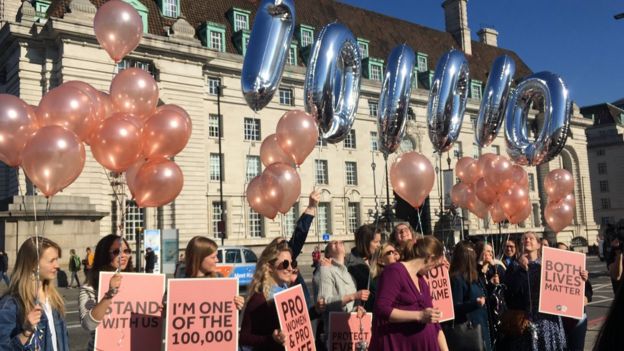 Image captionThe Both Lives Matter campaigners were accompanied by balloons

The Both Lives Matter campaigners called on the Northern Ireland secretary to ensure that Westminster "respects devolution and does not impose an extreme abortion law on Northern Ireland".

Its protest included 10 women, each carrying a box which the group said contained: "10,000 names symbolising the 100,000 people who are alive today because of Northern Ireland's abortion laws".

The commission has been in Geneva in Switzerland addressing the UN Committee on the Elimination of Discrimination Against Women.

What happened when NI's abortion law was challenged in court?

In June 2018 the Supreme Court dismissed an appeal brought by the NIHRC.

But a majority of judges said the existing law was incompatible with human rights law in cases of fatal foetal abnormality and sexual crime.

The commission lost on the issue of whether they had the required standing to bring the case, and analysts suggested the defeat came because of a technical legal point.

The Supreme Court judges said it would have required the case to have been brought by a woman who was pregnant as a result of sexual crime or who was carrying a foetus with a fatal abnormality.

Judges from the Northern Ireland High Court are considering a challenge to the law from a woman whose case is based on her personal experience.